Thai researcher Nuttaporn Pimpha has won the ASEAN-US Science Prize for Women for her development of the "nano water filter" that purifies drinking water for victims of natural disasters. 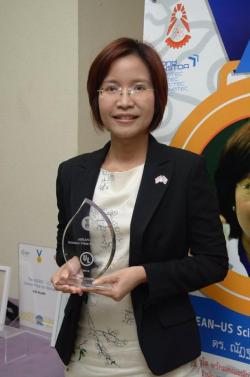 Ms. Nuttaporn, of the National Nanotechnology Center (NANOTEC), said her work aims to provide clean water for those suffering from disasters such as the 2011 floods.

"This filter can be disinfected on the surface and nanotechnology prevents mucus and moss from forming, helping produce quality water" she said.

Dr. Nuttaporn's award ceremony was held late last month during an ASEAN Science and Technology meeting in Indonesia.  She received a 800,000 baht prize.

Meanwhile, Thai physicists Saran Posayachinda and Wiphu Ruchopakan were noted for their work with Nasa in spotting asteroid collisions in another solar system which could lead to planet formation.