Palm oil is now the largest source of edible oil in the world, and cultivation of oil palm has expanded enormously in recent years, with worldwide yearly increases in demand being driven by dietary and biofuel applications. Oil palm cultivation in Thailand faced with problems of quality seedlings that can provide high yield and be grown in northern and northeastern regions, where rainfall is relatively limited. Crop improvement of oil palm is proved to be challenging, as it is a perennial crop species with a long breeding cycle.

With funding from the Agricultural Research Development Agency (Public Organization), or ARDA, researchers teamed up to develop oil palm elite lines well adapted to climates of various regions of Thailand. Several elite lines have been achieved using biomarkers in the selection process of Tenera, a hybrid of a thick-shell Dura and a shell-less Pisifera. These elite lines have been tested in research stations in the north (Nan province), the northeast (Khon Kaen, Sisaket and Nong Khai provinces), and the south (Krabi and Narathiwat provinces) of Thailand. The productivity is approximately 5 tons/rai (31.25 tons/ha), with an average oil yield of 25%, and bearing 15-20 fruit bunches annually. It can survive drought up to 90 days. Its slow vertical growth of 40-50 cm/year makes it easy for harvesting. 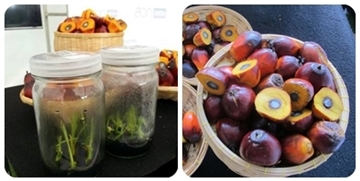 Apart from developing an elite line, a somatic seed production method has also been developed to efficiently propagate oil palm.  Researchers were able to develop a process to accelerate the generation of somatic embryos using inflorescences as the explant source to prevent parental tree damage.  This provides cost-effectiveness and reduces somaclonal variation of mass propagation of oil palm elite lines. The method has been filed for PCT patent by ARDA in 2011.

Production of elite Tenera seedlings started in 2012 at Kasetsart University and was released to interested farmers starting in October 2013. ARDA expected to release a total of 100,000 seedlings.

This research was conducted collaboratively between Genome Institute, Kasetsart University, Prince of Songkla University, Department of Agriculture and Golden Tenera Co., Ltd. and was financed largely by ARDA.