Situated in Thailand’s southernmost province of Narathiwat, Bala Hala Wildlife Sanctuary hosts as many as 10 hornbill species out of 13 species found in Thailand, including rare species like helmeted hornbill, wrinkled hornbill and white-crowned hornbill. Despite living in this rich habitat, these birds are facing housing crisis.

During the breeding season, around March and April, hornbill parents search for a tree cavity to establish a nest for the female and chicks to shelter inside for a period of 4-6 months, while the male is out to fetch food for the family. A nest is therefore vital to hornbill’s survival. Interestingly, hornbills are unable to make the nest cavities on their own despite their large bills. They use cavities naturally formed on trees or excavated by other animals as their nests.  New tree cavities take time to develop into proper size and dimension, whereas old ones tend to close up or deteriorate over time, resulting in the loss of habitat. With the rise in hornbill population thanks to the conservation effort, more tree cavities and tree nests are needed. 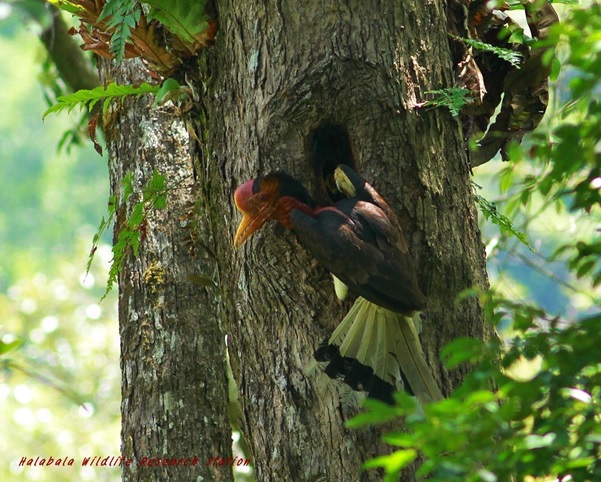 To intensify hornbill conservation program, NSTDA has been supporting the efforts of local authorities such as Hala-Bala Wildlife Research Station and local community to restore hornbill nests in and around Bala Hala forest. Under this project, government officials and villagers survey the forest, look for tree hollows and restore them to the conditions as identified by the Hornbill Research Foundation to be suitable for each hornbill species to lay their eggs and raise their chicks. For instance, a large-size hornbill will require an opening of 13 cm in width x 30 cm in height. If an opening is found to be too large or too small, adjustment will then be made accordingly by the staff. The work also includes identifying which hornbill species previously occupied the nest, so that the restoration can be made to suit the species and ready for their return in the following breeding season.

Restoring hornbill nests is no small task. Staff has to make a long trip deep into the forest carrying over 100 kg. of equipment and gears. Some tree cavities are located as high as 40 m. above the ground. Local villagers were engaged to this initiative through training sessions organized by local authorities, covering topics such as how to conduct a survey, monitor bird nests and restore tree hollows. Twenty villagers have been trained and now become important crew of this restoration project and as well as overall hornbill research. 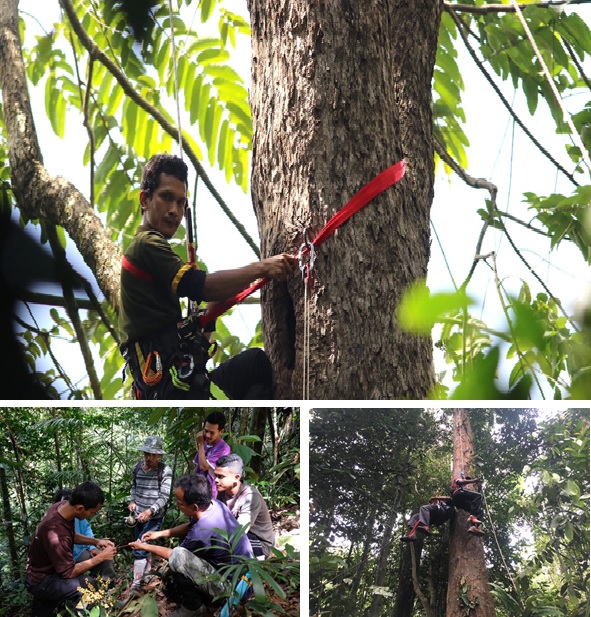 Two years since the project’s inception, 29 new tree cavities have been found.  Of these, ten cavities are hornbill nests - six used by rhinoceros hornbills, three by wreathed hornbills and one by bushy-crested hornbills. The project has restored ten cavities, two of which have served as nests of rhinoceros hornbills and bushy-crested hornbills.  This project not only saves this threatened species, but also successfully involves local people in the effort, ensuring sustainability.