Normally, latex collected from rubber trees has a very short life of 6-8 hours before spontaneous coagulation and spoilage taking place, resulting in the latex loss.  Ammonia and sodium sulfite are widely used as preservatives to prevent such undesirable reactions.  However, ammonia creates toxic fume, endangering workers’ health and causing

environmental pollution; whereas sodium sulfite leaves air pockets in dry rubber, lowering the rubber’s quality.  The Natural Rubber Focus Unit of MTEC-NSTDA therefore developed an innovative preservative called BeThEPS to replace ammonia and sodium sulfite. BeThEPS can effectively extend the colloidal stage of latex to 1-3 days, resulting in the elimination of latex loss and the improvement of dry rubber’s quality.  The extended period also means less transport frequency from the plantation to the processing factory, saving time and fuel for farmers. All these positive effects add 900 baht value to a ton of rubber production. 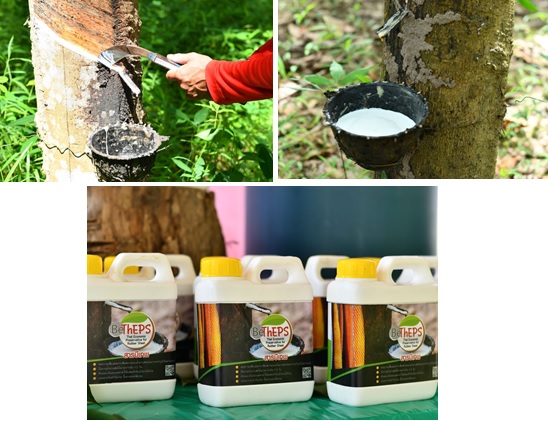 BeThEPS has been tested by rubber tree farmers in several districts of Nan province, including Wiang Sa, Tha Wang Pha, Chiang Klang, Mae Charim and Santi Suk districts, covering an area of 3,700 rai (approximately 600 hectares). Because the rubber plantations are mostly far away from the processing facility, farmers in this area have to make frequent trips to the processing facility due to the short life of latex.  Even with ammonia, farmers have to add ammonia frequently as it vaporizes easily.  After using BeThEPS, farmers have confirmed its effectiveness in preserving the latex and saving on the transportation cost.

According to the data provided by the Latex Processing Group of Nan Province, the daily collection of latex by the group used to be roughly 1.5 tons when farmers were using ammonia.  After the introduction of BeThEPS, the daily collection has increased to 10 tons, which means that BeThEPS performs far better than ammonia in preserving latex. The group’s daily earning has increased by 300 baht because of the less loss in the production process. Average monthly production capacity of this group is currently 70 tons of rubber smoked sheets, produced from 240 tons latex supplied by 200 farmers. BeThEPS helps reduce transportation cost by half, cut down labor cost, and generate an average of 216,000 baht/household over the harvest season. Furthermore, this product is safe to human’s health and the environment.

Dr. Julathep Kajornchaiyakul, MTEC Executive Director, further revealed that smoked sheets produced with BeThEPS from the Latex Processing Group of Nan Province has been sent to Otani Tire Company Limited to manufacture a prototype of truck and bus radial tires. The prototype was tested and met all the requirements and standards. 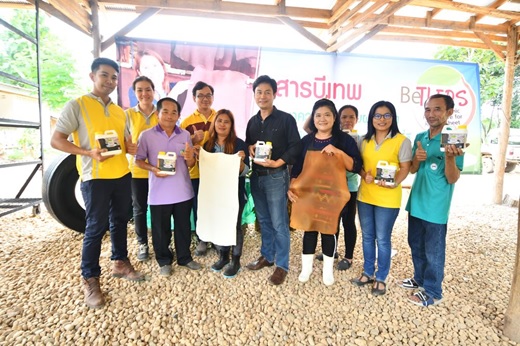 BeThEPS technology has been licensed to 4 companies, namely M.I. Inter, One Para Engineering, Intelligent Rubber Innovation and Ikkyu Enterprise, for production and commercialization.