Dr. Somvong Tragoonrung, Director of Genome Institute, BIOTEC, and staff from DNA Technology Laboratory and Genome Institute were honored with the 2013 Outstanding Technologist Award, presented by the Foundation for the Promotion of Science and Technology under the Patronage of His Majesty the King. He was recognized for his 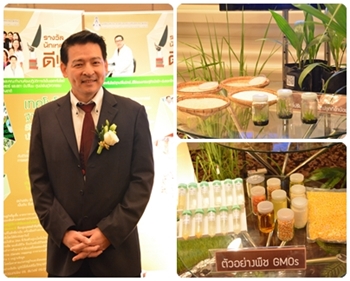 Dr. Somvong has been instrumental in defining genomics research since before the field was recognized as a significant discipline in Thailand. In 2000, he revolutionized scientific research here by founding the DNA Technology Laboratory as the most successful service laboratory in Thailand providing affordable technology for public agencies and more than 800 Thai and foreign companies. The services have been helpful in improving the quality of agricultural products, facilitating the export of products and addressing several international trade law and barrier issues. Two most important and sensitive diagnostic services for the country are the determination of Jasmine rice purity and GMO testing for exporting food products generating a strong impacts value over 50 billion Bahts.

As the Director of Genome Institute in 2006, Dr. Somvong has developed various genomic tools to facilitate genetic improvement of top national economic crops. His expertise in next generation sequencing provides important genomic platform for breeding perennial crops like oil palm, the highest potential oil and energy crop for Thailand. He has developed new and improved oil palm varieties with high yield and oil content and drought-tolerant traits. Using biomarkers in the selection process enables his research team to shorten the breeding process of oil palm from 15 years in the conventional breeding to only 5 years. Normally, grown in the southern Thailand where humidity and rainfall are high, these elite lines have shown to thrive well in the trial performed in the northeastern part of Thailand. His research team also developed a novel somatic seed production method to efficiently propagate oil palm. One hundred thousand seedlings of these elite lines will be produced next year by Kasetsart University for large-scale validation. 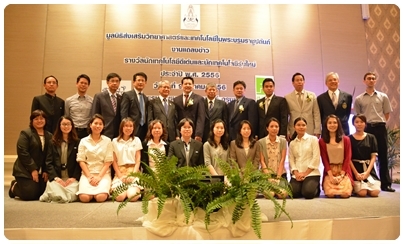 The Foundation for the Promotion of Science and Technology under the Patronage of His Majesty the King was established in 1982 as a non-governmental organization with the aim of promoting the advancement of science and technology in Thailand. It annually presents Outstanding Scientist Awards and Outstanding Technologist Awards to recognize Thai researchers with exceptional achievements in science and technology development and to encourage active younger researchers to perform high quality research work of significant impact to society and economy.