Seed industry is a primary industry which has a strong impact on the quantity and quality of agricultural products down the value chain.  Important to this industry is an ability to detect and identify plant pathogens which is essential to epidemiological and disease management studies, selective breeding programs and disease-free certification

for import and export.  Conventional detection methods are time-consuming, laborious and require special skills such as in taxonomy to identify the pathogen responsible for disease.

Researchers have developed a novel multiplex detection method based on microsphere immunoassays to simultaneously detect four important plant pathogens: a fruit blotch bacterium Acidovorax avenae subsp. citrulli (Aac), chilli vein-banding mottle virus (CVbMV, potyvirus), watermelon silver mottle virus (WSMoV, tospovirus serogroup IV) and melon yellow spot virus (MYSV, tospovirus).  An antibody for each plant pathogen was linked on a fluorescence-coded magnetic microsphere set which was used to capture corresponding pathogen. The presence of pathogens was detected by R-phycoerythrin (RPE)-labeled antibodies specific to the pathogens. The assay was able to detect all four plant pathogens precisely and accurately with substantially higher sensitivity than enzyme-linked immunosorbent assay (ELISA).  The assay time of the microsphere immunoassay is an 1 hour, as opposed to 4 hours required by that of ELISA.  This system was also shown to be capable of detecting the pathogens in naturally infected plant samples.  The capacity of this microsphere immunoassay technique could be further expanded to higher throughput such as detecting up to 50 targets simultaneously. The system could also become fully automatic if dealing with a larger volume of routine testing.

The paper, describing the development of a multiplex microsphere immunoassay to detect the widespread plant pathogens, was published in PLOS ONE in April 2013. The work is a collaborative effort between scientists from BIOTEC and Queen’s University Belfast, UK. 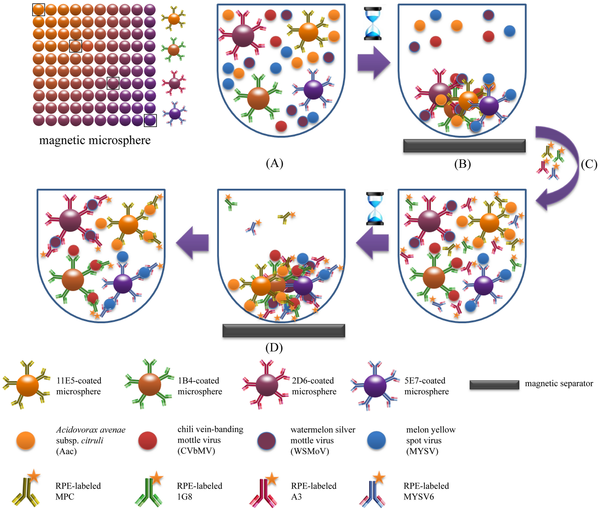