BIOTEC researchers investigated an effect of bacterial lipopolysaccharide (LPS) as feed supplement to improve immunity of the black tiger shrimp (Penaeus monodon). LPS was coated to commercial feed pellets and given to the shrimp. The immunity was tested by exposing shrimp to pathogenic bacterium Vibrio harveyi. 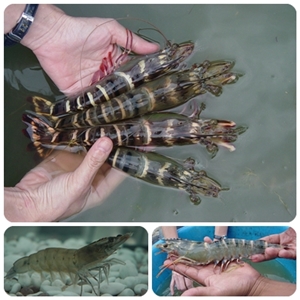 From the experiments, it was found that while the LPS containing diet did not have an effect on growth rate, it resulted in significantly higher survival rates when exposed to V. harveyi than the normal diet. The LPS supplement also showed induction of some crucial immune-related transcripts such as ALF3, C-lectin and mucin-like PM in shrimp digestive tracts. These findings suggest that LPS was able to activate the immune system at a molecular level in digestive tract of the host and enhanced disease resistance in the black tiger shrimp. LPS supplement is therefore a promising candidate to increase disease resistance in black tiger shrimp farming. Further investigation on optimal dosages and formulation for the LPS supplement for this purpose should be conducted for future application.

The result of this work was published in Developmental and Comparative Immunology.