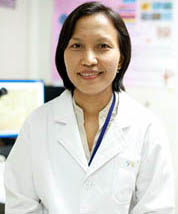 The main goal of this project is to gain the basic knowledge on the butt rot disease biology, cause of the disease, diversity and biology of probable fungal pathogens in mangrove forests from various locations in Thailand, including two main stations Ranong Biosphere Reserve (Ranong Province) and Had Khanom Mu Ko Thale Tai National Park (Nakhon Si Thammarat Province), where the butt rot have caused massive deaths of mangrove trees.  The expected results of this research include building up the fungal biodiversity database for Thailand and the information obtained from this research will be the baseline for establishing a long-term forest pathogen management system, awareness for mangrove conservation and sustainable development of the mangrove forests for Thailand.

About Man and Biosphere (MAB) Young Scientists Awards - "Help Young People Help Planet"
The MAB Young Scientists Awards encourages young scientists to conduct interterdisciplinary research on ecosystems, natural resources and biodiversity, in line with the MAB Programme's focus on sustainable people and biosphere interactions. Awards for young researchers who want to carry-out interdisciplinary research in line with the MAB Programme. Priority is given to interdisciplinary projects carried-out in biosphere reserves on the theme of ecosystems and water. The MAB program has been awarding yearly scholarships of up to US$5,000 to ten young researchers, to encourage them to work on ecosystems, natural resources and biodiversity. In addition, two special fellowships financed by the Austrian MAB Committee are also being awarded this year.