The third-generation, or 3G, mobile Internet services are still a hot topic though the current 3G infrastructure is still quite ready for business use. In terms of research and development, Thai researchers have already started using 4G technologies which by far more advanced than the Internet services offered in other countries. 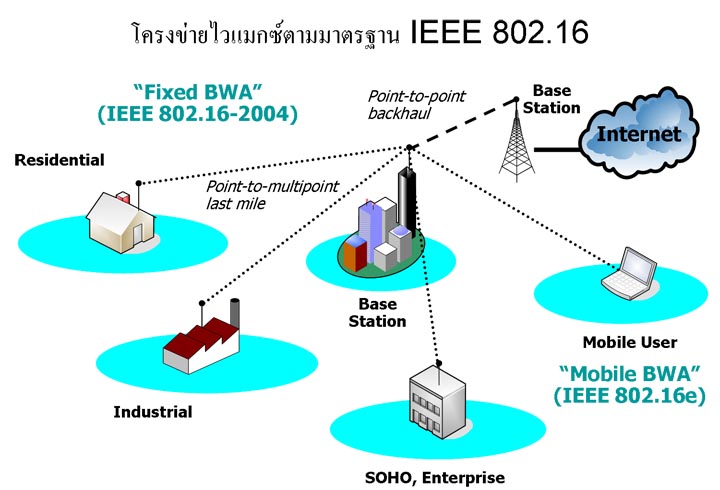 WiMAX (Worldwide Interoperability for Microwave Access) is a 4G telecommunications protocol that can provide broadband wireless access (BWA) of up to 30 miles or 50 kilometres for fixed stations and can deliver broadband at around 75 megabits per second, which is 30 times faster than the 3G protocol.

Dr. Ravipat Phudpong, a researcher at the Wireless Innovations and Security (WIS) Laboratory, the National Electronics and Computer Technology Center (NECTEC) NSTDA, is currently testing and deploying a WiMAX terminal as part of the IT Valley project in Mae Hong Son.

“We have received collaborations in the terms of network equipments like base stations and IEEE 802.16 WiMax terminals from the Japan International Cooperation Agency (JICA) for the technology's implementation in the valley region in Mae Hong Son. The research team has set up base stations in Muang, Mae Sarieng and Pai districts. We have a server installed at a community college that has an leased-line internet connection and transmits signals to the base stations. In the Muang district, we have installed a WiMAX base station in Doi Kong Moo area and installed WiMAX terminals in different locations where we want the Internet service to be available such as schools, hospitals and public offices. We then transmit the signal to those places. However, as most of the areas of Mae Hong Son Province are complex mountain ranges and likely still pristine virgin forest, the signal transmitted from the terminals can sometimes be too weak to reach the base station. We have therefore increased the transmitted power of the terminals to enable them to transmit signals over greater distances, which will make the service available to a wider area.”

They have developed a WiMAX terminal capable of transmitting 4 W of output power, which is much greater than today’s typical terminals, giving approximately100-200 mW.. To invent a power amplifier designed for WiMAX terminals, they have tested it in various scenarios. The power amplifier worked well and met the IEEE 802.16 WiMAX wireless technology standard. Their invention is also much cheaper than those manufactured overseas and is much more powerful than other terminals currently available in the market.

WiMAX terminal has received the Telecom Innovation Award 2010 from the Telecommunications Research and Industrial Development Institute (TRIDI) and the invention is patent pending.

The geography of Mae Hong Son requires the using of WiMAX to enable people in the province to connect with internet and this requirement has driven to create a powerful invention. The WiMAX terminal developed by the research team can be commercialized and implemented widely when the government is ready to license WiMAX spectra.

“The implementation of WiMAX in Thailand is still at an early stage and is mostly in the public interest. Examples include the IT Valley project in Mae Hong Son province and the Mae Fah Luang project. In the future when the government starts to license WiMAX spectrums, companies with allocated spectrums might be interested in our terminal because it meets the required standard and is very powerful.” 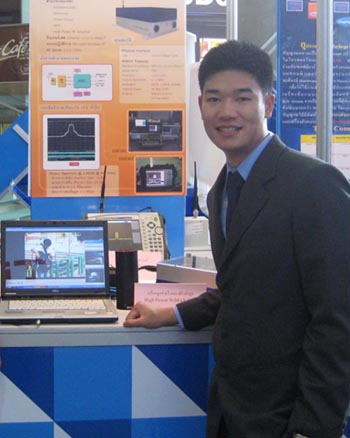 Dr. Ravipat Phudpong is a young researcher who is very passionate about telecommunication technology. He obtained his bachelor’s degree in telecommunication engineering from King Mongkut's Institute of Technology Ladkrabang and then received a Royal Thai Government scholarship to study RF & microwave circuit design at the University of Surrey before going on to gain a doctorate degree from the University of Leeds in England.

This young researcher is determined to conduct research that will lead to practical applications that can be commercialized or used for the public’s benefit. In addition to the research on the WiMAX terminal, Dr. Ravipat also contributed his knowledge to enhancing the capability of the T-Box 3.0, which is being used by Thailand’s national security forces. He is also researching and developing a device for storing energy from radio waves, which is another intriguing research project.