Farm trucks, otherwise known to Thai people as “Rod Ee Tan”, have been Thai farmers’ vehicles of choice for over 40 years. In the past, farm trucks were used mainly for transporting produce or farming tools. Farmers or local mechanics would build farm trucks with second-hand parts, making the vehicles unstable and fall short of meeting a minimum acceptable standard of safety. This is the  reason why there are many road accidents that caused damage to life and property. 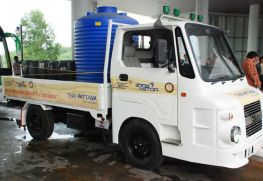 Thai Pattana made multipurpose truck safe
To assure Thai farmers their favorite farm truck’s safety  and efficiency, a team of researchers at the National Metal and Materials Technology Center (MTEC) analyzed the safety issues that led them to research and develop a “Thai Pattana Multipurpose Farm Truck”.   The new farm truck meets a good mechanical standard to ensure the safety of the drivers and other people on the road.  The prototyped truck has a gearing system, rear axle, chassis, steering system, suspension system and brake system that meet proper mechanical and safety standards. The researchers also added a multipurpose water pump and other improvements so that farmers can maximize the use of the farm truck.  Usages include transporting things, people and water, in the face of droughts.

The prototype car was tested in a dairy farm by the researchers who applied improvements such as adding height to the lower structure of the truck in order to clear road bumps and enable the truck to carry more weight.  Their efforts have led them to develop the high-performance Thai Pattana (MTEC Embeded) multipurpose truck.

The researchers have strengthened the structure of the truck by improving the existing technology in five areas:   chassis, hub and braking system, steering system, rear axle and suspension system.  They based their design on accurate mechanical engineering principles.  This has led  them to building a structure of a multipurpose truck that weighs 3 tonnes (with freight on board), uses one cylinder in the 14-horsepower diesel engine and is able to use biodiesel fuel.  In addition, a model truck is more compact and much safer.  The water pump has been added to the vehicle and enabled the truck to fold down on three sides at the rear.