To prove that “a one-atom-thick material really exists”, Dr. Andre Geim and Dr. Konstantin Novoselov from the University of Manchester, England, patiently conducted research and discovered “graphene – the one-atom-thick material” as a result.  This year, the two won the 2010 Nobel Prize in Physics and “graphene” has become the most watched material as it will change the technology of tomorrow. 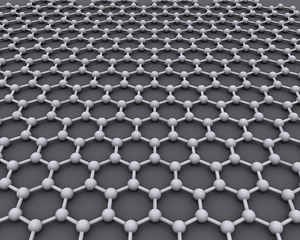 “Graphene” comes from “graphite”, a natural material of layered structure whose layers attract one another with mild attractive forces called the van der Waals.  “Graphene” consists of atomic carbons arranged in two dimensions in a honeycomb-like lattice structure.  It was discovered and developed by “Micromechanical Cleavage” or the “Scotch Tape Method” in which the adhesive tape was put on graphite flakes and then graphene was peeled off, one layer at a time.  Though this graphene isolation method seemed easy, the further part was hard enough to prove its one atom thickness.  The two scientists eventually unveiled graphene by putting it on silicon dioxide substrates.

The orderly way the carbon atoms are arranged makes “graphene” the hardest material, even harder than steel and diamond, yet flexible.  It can be easily bent, rolled or folded.  In addition, it is four times better than copper in terms of electrical conductivity, and 2 times better than the nanocarbon tube.  It also has a transparency of 97%.

“Graphene” has the potential to replace silicon in electronic parts and other high-cost materials.  In place of indium tin oxide, which consists of rare and costly indium, “Graphene” can be used in producing optical parts in computer, television and mobile phone displays.

The fact that “Graphene” has outstanding properties has prompted scientists all over the world to look for ways to use this special material, among them are 1.) a group of researchers from the National Electronics and Computer Technology Center (NECTEC) that is successful in synthesizing “Graphene” for using as the conductive ink for electronics circuit and 2.) a group of students and researchers of Mahidol University that joined forces to conduct research on “Graphene” and published their findings in international academic journals.

For the first time ever, “Graphene” has been synthesized for production of conductive ink, using an electrochemical technique 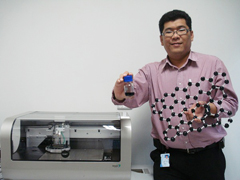 Dr. Adisorn Tuantranont and a team of researchers at the Nano-electronics and MEMS Laboratory, National Electronics and Computer Technology Center (NECTEC), are the first team in the world that succeeded in synthesizing “Graphene” using an electrochemical technique that can be used as an ingredient in the producing conductive ink in electronics circuit fabrication that can be used in inkjet printers.  Their goal was to produce less costly sensors that are outstanding in terms of electrical conductivity and free of production contamination.  The team worked on research and development for 6 months before succeeding in producing pure Graphene which was mixed with polymer in aqueous form to be used as ink for fabricating electronics circuit.  The development has made the electronics circuit 40-50% more efficient in terms of electrical conductivity. 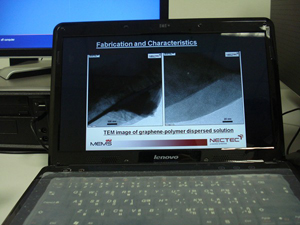 The team aims to develop electronic sensors for biological, chemical and gas measurement instruments.  A strong point of a sensor developed from Graphene-based ink is its ability to provide high-precision measurements even with low levels of substances to be measured.  Currently, the team is developing a sensor for measuring blood glucose levels in patient with diabetes and a sensor to detect contaminants in food.

The outstanding properties of “Graphene” have prompted a group of graduate students of the Department of Physics, Faculty of Science, Mahidol University, to join forces in research and development work on it, focusing on the theoretical study of Graphene’s electrical properties in order to discover properties and predict behaviors of Graphene in various aspects.  Their findings will be a body of knowledge from which other scientists can find ways to develop Graphene sheets to be used in the production of nano-electronic equipment in the future.

Since the beginning of the research on “Graphene” in 2006, the team has published their findings in 11 international academic journals and is considered the first research group in Thailand that has worked on Graphene and produced theoretical findings that are internationally accepted.  The team’s published work concerns topics such as superconductor properties of Graphene, bilayer Graphene, the use of electric field calculation in band gap control and a Graphene elasticity study.

Even though “Graphene” was discovered not many years ago, its outstanding properties have attracted scientists from all over the world and prompted them to conduct research on this special material in order to produce innovations that may revolutionize technology and life as we know it.