Located in the central plain of Thailand, an intensively cultivated rice land, many provinces such as Ayutthaya, Suphan Buri and Nakhon Pathom are a lowland area drained by the Chao Phraya River and its tributaries.  During a monsoon season, flash flooding is a common problem in these areas.  Large areas of rice paddy fields are submerged under the water.  Only some rice varieties have ability to survive and perform well under submergence condition. 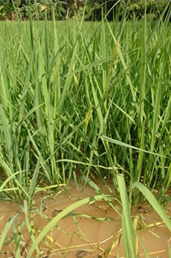 Homcholasit rice, a cross between KDML105 and IR57514, was developed with a quality for flash flooding tolerance and non-photoperiod sensitivity.  It can survive under the water for upto 2 weeks after the occurrence of flash flooding off-season rice.  Homcholasit rice can be planted for grains during and outside the regular cropping season, providing yield of 5.6-6 tons per hectare.

Realizing that Homcholasit is suitable for cultivation in central region, especially in areas prone to flash floods, BIOTEC thus collaborated with the Pak Hai Farmer Cooperative in Ayutthaya Province to introduce this rice variety to the farmers by setting up a program to train member farmers to produce Homcholasit seeds for future cropping seasons.  The first demonstration crop, covering the area of 10.5 hectares, started in August and will be ready for harvest in December 2010.

Homcholasit was developed by Dr. Theerayut Toojinda, BIOTEC researcher in collaboration with the Rice Department and Kasetsart University.