Thai military researchers have successfully developed a laser distance-measuring device that is safe to the eye.  The rangefinder is capable of measuring distances of up to ten kilometres, offers absolute precision and can be used in aiming artillery guns mounted on tanks or vessels. 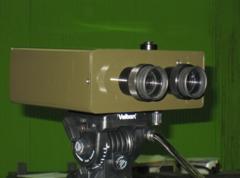 Group Captain Sahapong Kruapech, Military Research & Development Center (MRDC), Defence Science and Technology Department, said laser technology is playing a very important role in the military.  The uses of military lasers include artillery guns whose laser determine the coordinates of the enemy and guide missile trajectories.  Over fifteen years, Thai Military has been purchasing mobile laser distance-measuring devices from overseas, leading to issues concerning maintenance-due and hard-to-find parts, some of which are no longer manufactured.  More importantly, laser beams could be hazardous to the human eye and cause blindness if not used or repaired cautiously. These concerns prompted the MRDC to develop an eye-safe laser distance-measuring device with funding from the Reverse Brain Drain Project, which is part of the National Science and Technology Development Agency (NSTDA).

“Laser distance-measuring devices widely used in military applications typically emit light with an unsafe wavelength of 1,064 nanometres, as lasers at wavelengths between 400 nm and 1400 nm are transmitted through the cornea and lens and can damage the retina.  Also, lasers can do serious damage and lead to blindness when misapplied or mishandled during maintenance.  This mobile, eye-safe rangefinder is the solution for both maintenance and eye safety issues,” said Gp. Capt. Sahapong 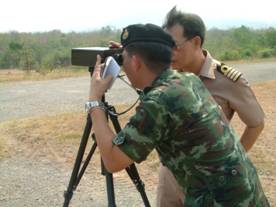 This rangefinder employs a laser that emits at an eye-safe wavelength of 1540 nm, which cannot be transmitted through the lens to the retina and is absorbed by the cornea.  This rangefinder operates on the time of flight principle by sending a laser pulse in a narrow beam towards the object and measuring the time taken by the pulse to be reflected off the target and returned to the sender.  The device then converts the time of flight into a distance measurement.

This rangefinder is capable of measuring ranges of up to 10 kilometres with incredible +/- 5 metres accuracy, which is within the blast radius of the artillery gun or missile whose blast easily spans over 10 metres.  In addition to emitting at an eye-safe wavelength, the device’s laser is a diode-pumped solid-state laser, which is twenty times more efficient than flash lamps, making this military rangefinder able to measure distances over 10,000 times per single battery charge cycle.  By contrast, previous rangefinders could only measure 600 times per battery charge cycle.  The most important benefit of this rangefinder is that its laser emits at a wavelength that cannot be seen by the human eye; therefore, the enemy will not realise that the rangefinder is in use.

Gp. Capt. Sahapong said the eye-safe laser rangefinder had been tested in the field and found to be highly efficient and very precise.  It can be used to measure distances and guide the projectile of gun turrets mounted on tanks or vessels.

“Further development of this device will include adding GPS and a built-in electronic compass for self and target location.  The GPS will resolve a location based upon latitude and longitude so that the user will not have to calculate later.  Moreover, there have been discussions about adding a communications system that would let soldiers in the troops know the location of the target simultaneously.” said Gp. Capt. Sahapong