Researchers at the National Center for Genetic Engineering and Biotechnology (BIOTEC) and Kasetsart University (Kamphaeng San Campus) have made a major scientific breakthrough by uncovering a genetic code that controls the aroma of Thai rice and discovering how to prove the gene’s role in controlling the rice’s fragrance.  The patent

for this technology has been filed in the US, Australia, China, the Philippines, Japan, Vietnam, India, France and the European Union and has already been granted a patent in the US.  Other countries, including Thailand, are considering granting patents for this technology and the process usually takes 3 to 5 years. 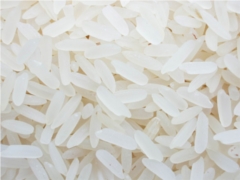 Dr. Somvong Traogonrung, director of Genome Institute, BIOTEC, who is part of the research team that discovered the gene controlling Thai rice aroma said, “By being granted the patents for the technology, Thai rice will be protected from other countries that may want to apply this technology with other species of rice.  Therefore, the unique aroma remains in only Thai rice.  This breakthrough can lead to further research on other technologies such as an aroma detection kit for rice and rice flour and innovations that will make genetically modifying rice easier and faster.”

In addition, Apichart Vanavichit, the director of the Rice Science Centre, Kasetsart University Kamphaeng San Campus, who discovered the aroma gene in Thai rice, said “Currently, we are studying how to make Thai jasmine rice’s aroma more intense or prolong the fragrance.  We are also studying how to make rice more resistant to bugs as the aroma often attracts them.  We will also study other genes that have roles in controlling the aroma in order to develop new innovations for when the patents expire.  The term of a patent is only 20 years.

The Ministry of Science and Technology has presented to His Majesty the King a report on the patents for the discovery of the gene that controls rice aroma as well as the HM King Bhumibol Adulyadej Commemorative Medal which honours his commitment to encouraging and supporting Thai rice development and production.