Dr. Bongkoch Tarnchompoo of the National Center for Genetic Engineering and Biotechnology (BIOTEC) has been awarded a Bill & Melinda Gates Foundation grant for research into means of suppressing the development of drug-resistance in malaria parasites. 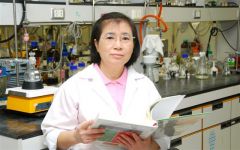 Malaria is a mosquito-born, life-threatening disease that has spread to nearly every part of the world. Every year as many as 500 million are infected with malaria and as many as two million die.  In Thailand alone, more than 30 thousand become sick every year.  To date, there is no highly effective vaccine, and the parasites are becoming resistant to anti-malarial drugs, making it difficult to treat.  Most cases occur in poor rural areas far from cities, resulting in higher mortality rates.

Malaria continues to be a killer in Thailand and BIOTEC researchers have been seeking ways to combat drug-resistance in malaria parasites.  After 16 years of research, Dr. Bongkoch Tarnchompoo of BIOTEC’s Protein-Ligand Engineering and Molecular Biology Laboratory has succeeded in synthesizing an inhibitor effective in suppressing the development of drug resistance in the laboratory.

In consequence of this discovery Dr. Bongkoch has been awarded the Gates Foundation Grand Challenges Explorations Grant to develop Dual-mode binding inhibitors to suppress P. falciparum DHFRs.  The Grant supports research and stimulates innovative thinking in treatment and prevention of serious infectious diseases such as AIDS, tuberculosis, and malaria.  Among the 81 recipients from 17 countries selected from over 3,000 applicants, Dr. Bongkoch is the only ASEAN scientist to receive this 100,000 USD grant.

The project will develop and test antimalarial agents that suppress the development of drug-resistance, emphasizing antifolates that inhibit the evolution of the Dihydrofolate reductase (DHFR) enzyme in the Plasmodium falciparum parasite. Alterations in the structure of DHFR are an important factor in the evolution of resistance to antimalarial drugs.

The present research builds on previous results and aims at synthesizing antimalarial agents that suppress the development of drug-resistance.  Those agents will then be developed into treatments of the disease in humans.  Success would lead to reductions in infection and mortality rates, benefiting not only Thais, but hundreds of millions throughout the world.

WHO Grant for Computer Conquest of Dengue Fever

BIOTEC’s Dr. Ekachai Jenwitheesuk has received a WHO Director’s Initiative Fund grant for computational research into treatments of dengue fever.

Like malaria, dengue fever is a deadly and highly infectious disease that ravages the tropics. Each year, 50 to 100 million fall ill and the only known treatment is symptomatic, to prevent the patient from going into potentially fatal shock.  There is no vaccine, and epidemics are very difficult to prevent and control.

The World Health Organization promotes and funds research into diseases such as tuberculosis, malaria, and dengue fever that are common in developing nations that may lack the funds to pursue such research on their own.  A 15,000 USD WHO Director’s Initiative Fund award supports Dr. Ekachai Jenwitheesuk’s research at BIOTEC’s Biostatistics & Informatics Genome Institute.  After years of research, Dr. Ekachai has been successful in using computational methods to search for agents to combat the dengue fever virus, under the Computational Design of Peptide Inhibitors for Dengue Envelope project.

The project has two main components.  The first is computational screening for an anti-viral agent.  This approach saves both time and money as it becomes unnecessary to test chemical substances individually for anti-viral activity. Second, computer programs are be used to design new anti-viral agents from computational models of the structure of the virus.  Once the computational models have been completed, they will be given to chemists for the design of new medicines for experimentation and trial, leading finally to the treatment and cure of dengue fever.

Dr. Ekachai has now identified anti-viral agents against the second of four strains of dengue fever.  This strain is highly infectious and is present in Thailand and throughout the world.  He is now researching anti-viral agents for the other strains.