Thailand’s National Metals and Materials Technology Centre (MTEC), under the National Science and Technology Development Agency (NSTDA), announced the development of a new type of plastic covering for greenhouses that reduces heat by up to three degrees Celcius to combat the effects of global warming. In addition, it offers farmers the

other benefits provided by earlier prototypes, such as the reduction of ultraviolet rays. Branded ‘PolyTech Plastic’, the new greenhouse covering helps farmers improve crop yields, and was developed in partnership with Naresuan University and the Royal Project Foundation. 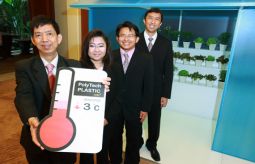 Assoc. Prof. Dr. Werasak Udomkichdecha, the Director of MTEC said that ‘PolyTech Plastic’, was developed to substitute for expensive imports that had put this advanced agricultural technology beyond the reach of Thai farmers.

“We have developed the technology to produce PolyTech Plastic locally and we can do it for 75% cheaper than the imported version. This will mean hundreds of thousands of Thai farmers will now be able to afford this new technology which will allow them to grow more expensive crops, improve their yields, as well as have the option to plant a wider range of crops and vegetables that need cooler temperatures and which may give farmers a better return,” he said.

“Being able to grow certain fruits and vegetables out of season can increase the prices that farmers can get for their crops by two or three times,” he noted. 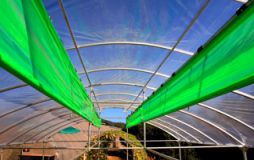 “Currently, there are 1.24 million rai under vegetable and fruit cultivation in Thailand, of which only 650 rai are under greenhouse covering. Exports and domestic consumption of fruits and vegetables exceed 36,500 million baht, annually, which means the new technology has the potential to increase the value of our country’s agricultural output by around 10,000 million baht through wider use of greenhouse covering and improved productivity,” said Dr. Werasak.

“Also, Thailand is the world’s largest exporter of tropical orchids with exports valued at approximately 2,500 million baht and a 35% global market share. This gives PolyTech Plastic the potential, if properly commercialized, to increase the value of just our orchid exports by hundreds of millions of baht,” he said.

Dr. Jittiporn Kruenate, Senior Researcher, MTEC, who is the leader of the team that developed PolyTech Plastic, said that, in field tests conducted with the support of the Royal Project Foundation, PolyTech Plastic was shown to reduce temperatures in greenhouses by up to three degrees Celsius, which can make a significant difference to the variety of crops that can be grown inside the greenhouses as well as improve their yields.

“This is particularly relevant to Thailand because of our hot climate. As a result of global warming, the temperature inside traditional greenhouses is getting too high and starting to damage crops and reducing overall yields. Farmers in Isan are especially vulnerable to this danger,” she said.

Dr. Jittiporn said that similar material is currently imported from Israel, France, Spain, and Italy, but that it is very expensive and unaffordable to most farmers, “typically costing four times greater than what we can now produce it for”.

In addition to reducing the amount of heat rays entering the greenhouse, PolyTech Plastic sheeting can also be custom-designed to reduce or eliminate other rays that can adversely affect the ability of a specific crop to grow.

According to Dr. Jittiporn, eliminating certain types of rays also helps prevent some plant diseases that need those rays to thrive. “This not only makes for healthier and better crop yields, it also means that farmers can reduce their use of insecticides by around 80% inside the greenhouse,” she said.

“Another breakthrough just made possible by PolyTech plastic is that we can now also control the proportion of different types of light entering the greenhouse,” said Dr. Thanasat Sooksimuang, Senior Researcher, MTEC, and a member of the PolyTech Plastic team. “This can increase the essential substances in herbs and plants. For example, it can make chili hotter, it can increase the antioxidants in some herbs. It can also boost vitamin content as well as improve the taste of some fruits, such as strawberries. All of this not only helps farmers improve the quality of their produce, but also helps Thai-grown fruit and vegetables compete better in global markets based on their taste and nutritional value,” he said.

Dr. Thanasat said that PolyTech Plastic, additionally, improves the diffusion of light inside the greenhouse, ensuring that an optimum amount of light reaches all crops wherever they are in the greenhouse and even in overcast weather, so that they can grow better.

PolyTech Plastic is the culmination of five years of research and development and began with early prototypes that were just able to filter ultraviolet (UV) radiation.

Dr. Thammarat Panyathanmaporn, Senior Researcher, MTEC, and also a member of the PolyTech Plastic team, said that the depletion of the ozone layer was creating increased UV-B radiation.

“Staple crops, vegetables and fruits are essential for Thailand’s economy and food supply, and they are adversely affected by UV-B radiation. It’s not just people that are vulnerable to UV-B radiation. Plants are, too. UV-B radiation affects living organisms by damaging their cellular metabolism including inactivation of enzymes, disruption of membrane structure and the generation of “free radicals,” said Dr. Thammarat.

‘Smart PolyTech Plastic’ to be launched in 2009

Dr. Jittiporn said the next major step forward in the research and development process is to create ‘Smart PolyTech Plastic’. “Within 2009 we aim to have developed an even more advanced plastic for greenhouse covering. Currently, PolyTech plastic recognizes and eliminates harmful rays while also reducing heat. Next, we want to develop ‘Smart PolyTech Plastic’ that will recognize harmful rays and, rather than just eliminate them, it will be able to convert them into rays that plants need to grow better.”

Prof. Dr. Werasak said PolyTech plastic was developed by MTEC and Naresuan University working together, and had also received the support of the Royal Project Foundation as well as the private sector.

“This is a good example of how a state research and development agency like MTEC, under NSTDA, can work collaboratively with academic institutions, such as Naresuan University, to leverage expertise anywhere it can be found, as well as harness the resources of the private sector to generate outputs that are directly relevant to the needs of agriculture, industry, as well as healthcare.”

He said that Quality Pack Printing 2000 Co., Ltd. provided the PolyTech Plastic research team with the equipment and operating knowhow to make the test batches of PolyTech Plastic sheeting.

According to Dr. Uthai Wichai of Naresuan University, the university’s Faculty of Science used its knowhow in synthesizing materials to reduce heat rays to help produce PolyPlastic.