NSTDA delivers Cozy Mark IV aircraft to Rajamangala University of Technology Krungthep as part of a drive to help the aviation industry reach its goals. 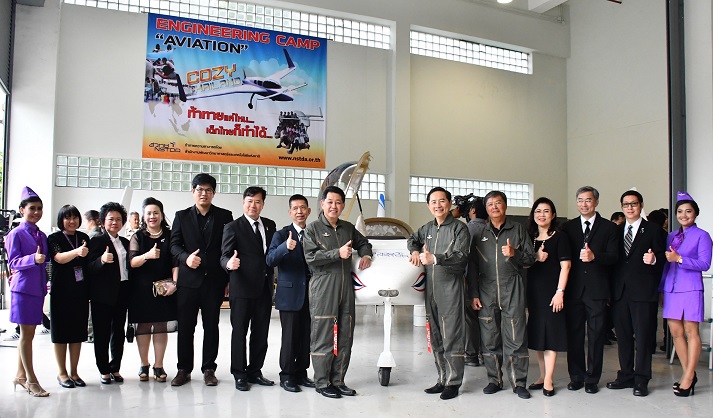 The aircraft, called the Cozy Mark IV, was the first ever to be designed and built by Thai secondary-school engineering students, and is capable of flying. It is the end result of the NSTDA’s ‘Engineering Design and Development of Cozy Mark IV Thailand Project’, which began more than seven years ago. At Rajamangala University of Technology Krungthep, the Cozy Mark IV will be used to educate and train maintenance crews.

The aircraft was handed over by NSTDA President Dr. Narong Sirilertworakul, accompanied by the Executive Vice-President of NSTDA, Dr. Chadamas Thuvasethakul, the Dean of the Faculty of Engineering at Rajamangala University of Technology Krungthep, Professor Pramote Anunvarapong and the Manager of the Engineering Design and Development of Cozy Mark IV Thailand Project, Dr. Sawat Tantiphanwadi.

Dr Narong said the NTSDA sought to encourage the development of knowledge and awareness of science, technology and innovation in order to nurture the engineering and design skills of Thai students. Engineering is one of the key fundamental sciences that will help Thailand to move forwards, he said.

However, not many secondary-school students in Thailand receive training in these branches of science. There are few specialists in schools capable of educating, advising and encouraging students to gather the basic skills, knowledge and creativity to enable them to design and invent, so as to produce tangible innovations. 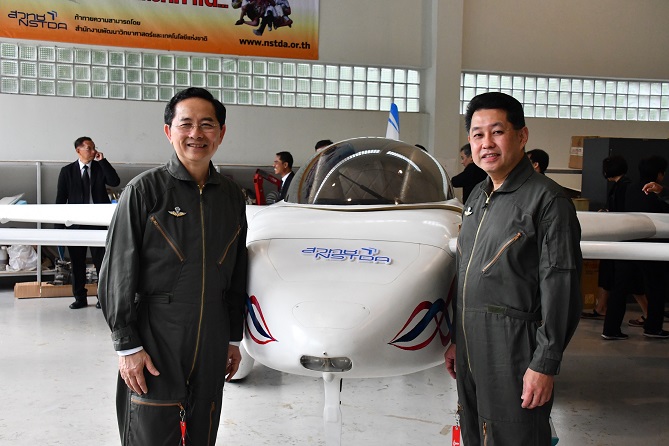 Therefore, the NSTDA arranged the Engineering Design and Development of Cozy Mark IV Thailand Project as an activity to develop human resources and to develop the engineering skills of secondary-school students. The project was managed by Dr. Sawat, a specialist in aviation engineering, and he also advised the students and controlled their work.

Dr. Narong said the NSTDA believed that young Thai people had high potential and were capable of developing aircraft if they were groomed, trained and advised correctly while working closely with a specialist. In the seven years of the Engineering Design and Development of Cozy Mark IV Thailand Project, 3,105 secondary-school students from around the country had played a part in designing and building the Cozy Mark IV at Sirindhorn Science Home, Thailand Science Park. All students took part in developing the body structure, installing the engine and completing its electrical and electronic systems.

“The four-seat Cozy Mark IV aircraft comes with a composite body and a 360-hoursepower engine that can support a maximum of 2,050 pounds in weight. It is now ready for real-use trials, including testing the gasoline engine and the aircraft’s electrical, fuel and propeller systems. It will be taxied on a road at Sirindhorn Science Home, Thailand Science Park.

“To make use of this development, the Rajamangala University of Technology Krungthep is interested in using the aircraft in its aircraft-maintenance crew training curriculum, which is part of the university’s Engineering Department,” Dr. Narong said.

The president of the Rajamangala University of Technology Krungthep, Dr. Sathit Puttachaiyong, said the university was a pragmatic institution that was strong in producing craftsmen. It had established its aircraft-maintenance training center in order to offer schooling of international standard and to leverage the status of Thailand’s aviation curriculum. It had seen the opportunity to produce aviation crews to serve the growth of the regional aviation industry and to meet the demand for human resources within the domestic aviation industry. The university’s aircraft-maintenance crew training curriculum is conducted in English, and adheres to the European Aviation Safety Agency (EASA)’s Part 66 standards, including CAT B1.1 and CAT B2. Students who graduate with certification from the Rajamangala course will be able to work in the industry and further apply for licenses according to EASA standards.

“The Rajamagala University of Technology Krungthep is interested in using the Cozy Mark IV aircraft in its aircraft maintenance crew training curriculum, to allow students to practice on the working systems of small aircraft, including the engine, repairing the composite structure, and understanding the communication system. The curriculum demands a familiarity with repairing small aircraft, as basic training for fixing larger aircraft,” Dr. Sathit said.