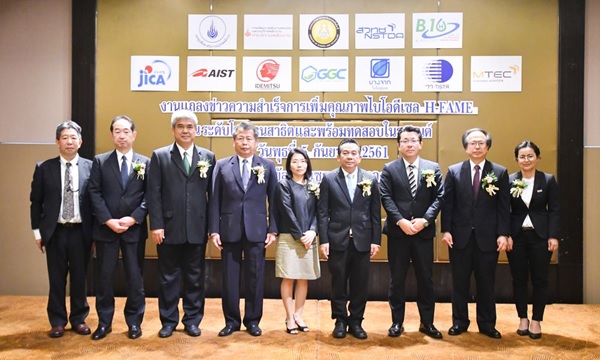 “MTEC’s main mandate is to conduct research and development to develop useful innovation for the economy and society.  This project is based on Thailand-Japan collaborative project that successfully developed an H-FAME technology, an innovative technology that improves biodiesel quality, at the pilot-scale production for an on-road test,” said Dr. Sumittra Charojrochkul, Director of Materials for Energy Research Unit.

“Today, we are pleased to announce the successful transfer of H-FAME technology from the research consortium, comprising Japan International Cooperation Agency (JICA), the National Institute of Advanced Industrial Science and Technology (AIST) and Idemitsu Group, to Global Green Chemicals PCL (GGC) and Bangchak Biofuel Company Limited (BBF). The high-quality biodiesel produced from this technology will be blended into the B10 biodiesel for a 100K-km on-road test of 8 pick-up trucks. The B10 will also be tested with cars used in the government agencies,” added Mr. Wanchai Bunluesinth, DEDE Deputy Director General.

According to Dr. Nuwong Collacoop, MTEC Senior Researcher and Head of the project, H-FAME technology is able to upgrade the quality of B100 biodiesel and therefore enable the production of biodiesel with higher blending ratio. The success of the pilot-scale production was truly due to a strong partnership among Thai and Japanese collaborators, especially JICA, AIST and Idemitsu, reinforced by the dedication of Dr. Yuji Yoshimura, the H-FAME inventor who worked in Thailand under JICA Senior Volunteer Program.

Mr. Hiroo Tanaka, Chief Representative of JICA Thailand Office, expressed his pleasure to see that H-FAME project which was funded by Science and Technology Research Partnership for Sustainable Development (SATREPS) Program from 2010-2015 is brought closer to the market with the support of DEDE and technical assistance of the Japanese team, including AIST and Idemitsu.

“GGC joined this project as a major B100 producer in Thailand. H-FAME is one of technologies that can improve B100 quality and is among the possible options being considered for GGC’s 2nd methyl ester plant, which once completed will increase GGC’s total production capacity to 500,000 tons of methyl ester/year,” said Dr. Nilubon Jong- Anurakkun, GGC R&D Manager.

Mr. Dhanajit Makarananda, BBF Managing Director, stated that BBF participated in this project in order to make improvement on biodiesel quality to meet the requirement of the auto industry. BBF has made an adjustment to its demonstration plant, with the capacity of 500 kg/day, to accommodate the H-FAME process. B10 from this technology will be tested with diesel-engine cars to build consumer confidence in this product.