1 July 2021, NSTDA and RTRI, Japanese’s technical research company under the Japan Railways (JR) group of companies, have entered into a 3-Year Memorandum of Understanding (MOU) from 1 July 2021 to 30 June 2023 to establish a formal technical cooperation to exchange and co-create the information, know-how, human development, and joint research in the area of railway technology. This formal collaboration aims for the enhancement and advancement of the Thai railway system.

The MoU signing ceremony has been conducted through a virtual platform. The MOU has been signed by Dr. Narong Sirilertworakul, President of NSTDA, and Dr. Ikuo Watanabe, President of RTRI, and witnessed by Dr. Ekkarut Viyanit, Director of Rail and Modern Transports Research Center of NSTDA and Dr. Tetsuo Uzuka, General Director of International Division of RTRI. In this event, Mr. Hosono Keisuke, First Secretary for Digital, Information & Communications Technology, Science, Technology & Innovation, Embassy of Japan in Thailand has attended and gave a greeting speech to celebrate the partnership. 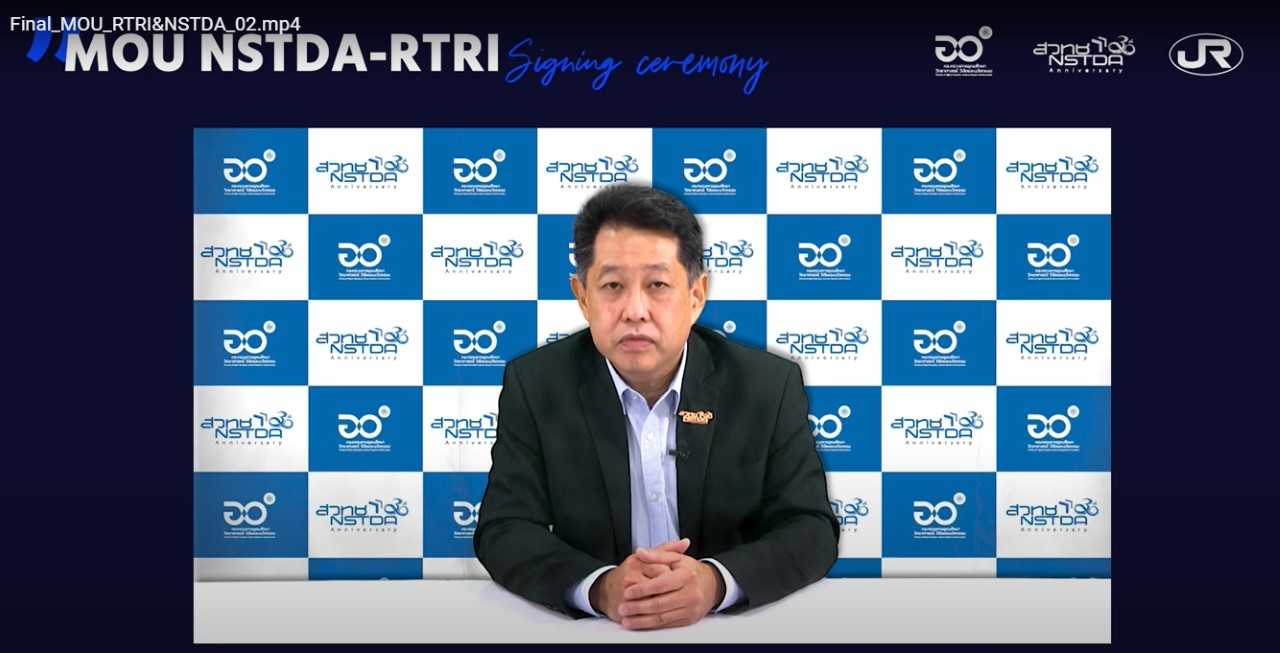 A formation of the collaboration between NSTDA and RTRI has actually been initiated since 2011. Through this relationship, RTRI has actively participated and offered different kinds of support e.g., hosting a technical visit on rail systems in Japan, co-hosting the important event for Thai railway system in Bangkok with NSTDA, the Thai Rail Industry Symposium and Exhibition (RISE), from 2016 till present.

“I am very much hopping that the establishment of a formal partnership between NSTDA and RTRI today would be a steppingstone to expand the exchange and co-creation of the information, know-how, and joint research in the area of railway technologies between our 2 institutes even wider and contribute majorly to the advancement of the Thai railway system as well as strengthen a bilateral relationship between Thailand and Japan even closer.” said Dr. Narong Sirilertworakul. 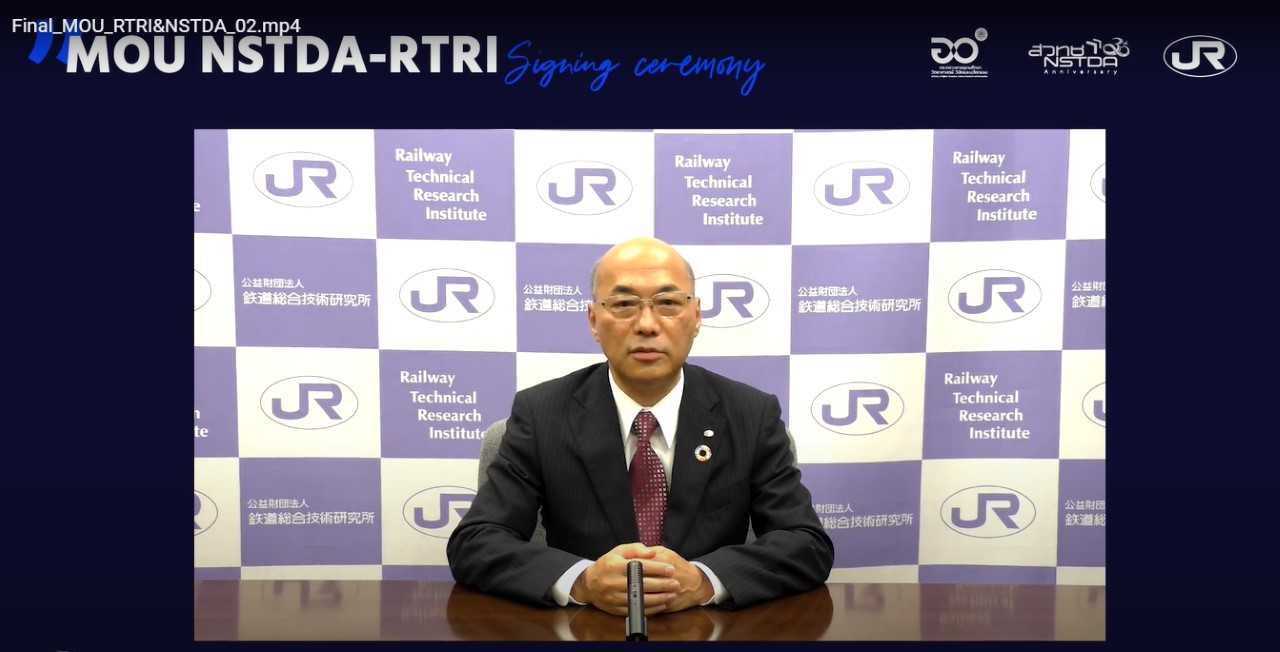 “With the fact that Thailand is one of the most strategic partners in South East Asia and NSTDA is among the leading research institute in the country. RTRI realizes that NSTDA has mandated and committed to the research and development for the advancement of the railway systems for Thailand. It is very much significant for both RTRI and NSTDA to conclude this Memorandum of Understanding on technical cooperation to support the R&D activities between our organizations to realize the aims of this MoU and later on beneficial to the rail system standard to our other friends in Asia” said Dr. Ikuo Watanabe

Mr. Hosono Keisuke added his note that it is well aware that the railway system is an essential infrastructure. The railway system could help improving a quality of life in logistics and daily transportation for the Thai people. From my observation, I see that, with a spawning of many rail routes in recent years, the railway system in Thailand has been progress rapidly with an opening of the new routes of the Thai sky train every year. In those new routes, we are very happy that a Japanese technology has been adopted and used in the red and purple lines. The event today between NSTDA and RTRI with the aim to jointly develop the innovations and technologies for the advancement of the Thai railway system is another important milestone the Embassy of Japan in Thailand would like to congratulate. 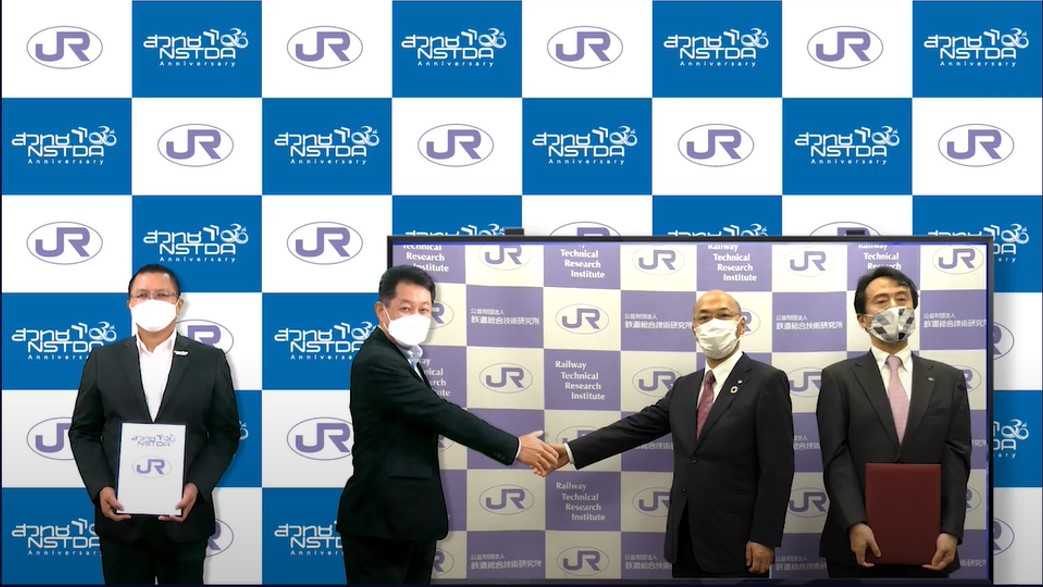 For the work in rail system and rail technologies of NSTDA, in February 2020 the institute has founded “Rail and Modern Transports Research Center (RMT)” as one of the R&D focus centers. RMT has mandated to develop ready-to-use technology for rail and modern transport industries by conducting R&D projects responsible for safety and reliability enhancement in the railway system with the focus on the development of predictive maintenance technology, development of automated inspection techniques, development of technology for railway parts & components manufacturing, and maintenance data analytics. Furthermore, the research work and technical capacity building on connected and automated mobility to enhance a convenience of railway passengers in last-mile connectivity are among the key areas of RMT responsibilities.