On 14-15 November 2018, Dr. Suvit Maesincee, Minister of Science and Technology, led a team of executives from agencies under the purview of the ministry, on a mission to the UK for discussion on partnership in science, technology and innovation. Dr. Narong Sirilertworakul, NSTDA President, was part of the Thai delegation.

In 2015, the governments of Thailand and the UK launched the Thailand – UK Newton Research & Innovation Partnership Program, designed to enable collaboration between scientists from Thailand and the UK in research and innovation in order to make contribution to Thailand’s economic development and social welfare. The program is being delivered by delivery partners in Thailand – such as NSTDA, the National Science Technology and Innovation Policy Office (STI), the National Astronomical Research Institute of Thailand (NARIT), the National Health Commission Office, and Thailand Institute of Nuclear Technology – and in the UK which include, for instance, Innovate UK, Medical Research Council (MRC), and the Royal Academy of Engineering, for instance.

The Thailand – UK Newton Research & Innovation Partnership Program is now in Phase II of the implementation.  As Phase II is about to be concluded, the Thai delegation held a meeting with Sir Mark Jeremy Walport, Chief Executive of the UK Research and Innovation, to review the success of Phase I and II and presented Thailand’s commitment to continue the partnership in Phase III.

Additionally, Minister Suvit and the team met with representatives of Innovate UK. Among the topics of discussion were Thailand’s Bio-Circular-Green Economy Model, as well as the intention of the Thai Government to learn and apply the UK’s Smart Specialization Strategy to the works of Thailand Ministry of Science and Technology, especially the Regional Science Parks and the Eastern Economic Corridor of Innovation (EECi) projects. 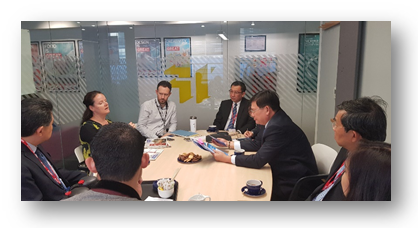 The delegation team travelled to Swindon to meet with representatives of the UK’s seven research councils to present the Thai Government’s research and innovation roadmap and discuss topics of mutual interest for future collaboration.