Two Thai researchers have been named finalists of "Euraxess Links Science Slam 2013", organised by Euraxess Links Asean, a pan-European project that seeks to link up researchers in Europe with their counterparts in the Asean region. 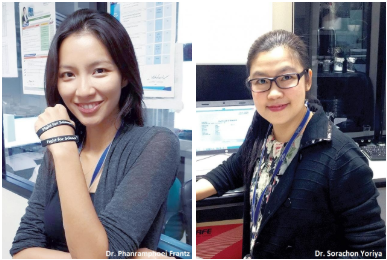 They are Phanramphoei Frantz, who works in the field of virology and molecular genetics at the National Center for Genetic Engineering and Biotechnology (BIOTEC), and Sorachon Yoriya, a specialist in material science engineering who works at the National Metal and Materials Technology Center (MTEC).

A science slam is a talk where scientists present their research work in front of a non-expert audience. The focus lies on teaching science to a diverse audience in an entertaining way.

Phanramphoei promises to win over the audience with "rhythm and rhyme", while Sorachon will try to impress the judges with her expert knowledge on electrochemical anodisation.

They are among five finalists from the region to compete for the title of "Asean's best science slammer" in the first global Euraxess Links science slam series. Each of the finalists will offer an entertaining 10-minute presentation of their respective scientific work to vie for top honours.

The five finalists were chosen from about 40 video entries received from young researchers in the ASEAN region.

They are currently affiliated with research institutions in Malaysia, Thailand and Singapore and represent the diverse spectrum of science ranging from gender studies to bio-nanotechnology.

The winner will join the champions from Brazil, China, India, Japan and North America at the Euraxess Conference in Europe called "Raising Researchers' Voices - Opinions on Jobs, Careers and Rights" in November.